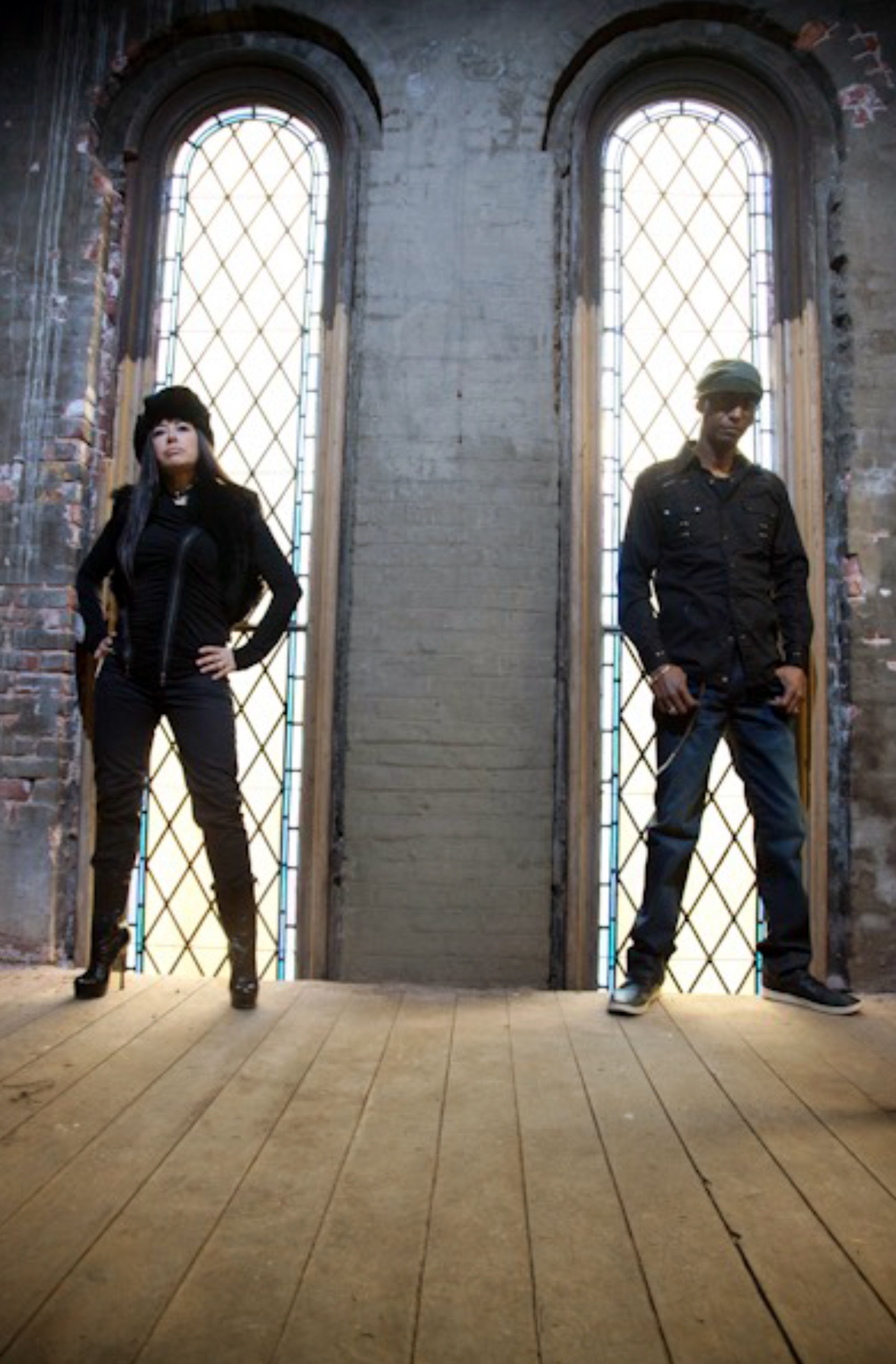 The band “OZ Experience” led by legendary drummer Omar Hakim and his wife – pianist Rachel Z is going to perform at Nisville 2018, at Friday, August 10th. Members of the band are also bassist Linley Marthe and guitar player JC Maillard leader of the band “Grand Baton”.


Pianist Rachel Z and drummer Omar Hakim bring their considerable skills and a combined wealth of musical experiences to bear on their collaborative project, The Trio of Oz. Blending a deftly swinging jazz sensibility with their genuine love of alternative rock, the two kindred spirits put a new spin on edgy anthems like “Angry Chair” by Alice in Chains, “Sour Girl” by Stone Temple Pilots, “Lost” by Coldplay and “I Will Possess Your Heart” by Death Cab for Cutie, among others. And while some jazz-oriented interpreters of pop music often make the mistake of ‘playing at’ the music, O and Z interpret these tunes from the inside out, capturing their essence before applying creative reharmonizations, rhythmic twists and stirring improvisations.


Perhaps it comes across so organically because both Rachel and Omar are uncommonly open-minded artists, equally conversant in jazz and rock – Rachel having apprenticed with Wayne Shorter and Peter Gabriel, Hakim having played with Weather Report and Miles Davis as well as Sting, Madonna and David Bowie. Or maybe their near-telepathic connection comes from the fact that they are husband and wife. Whatever the reason, the tremendously talented couple has found a perfect musical match in The Trio of Oz.


While the two have known each other for the past 20 years and even did sessions together, they didn’t hook up romantically until 2009. As Omar recalls, “I hadn’t seen her in maybe eight or nine years. I admired her, she admired me; we just never had a chance to really hang out. So in 2009, we were both free and we just discovered there was a vibe there. We went on a date in August, 2009, and we’ve been inseparable ever since.”


Their musical collaboration began on Rachel’s 2009 album I Will Possess Your Heart for the Japanese Pony Canyon label. Omar played on half of the recording and they recognized on that session that their chemistry was both deep and immediate. “As soon as we started playing together the vibe was so thick,” Hakim recalls, “It had an instant kind of cohesiveness to it. And because both of us play rock music, I think that I was able to kind of
pay respects to the original forms of the songs but then reframe them rhythmically and give them the space for the improv for Rachel to explore.”


Rather than touring as the Rachel Z Trio in support of the music on I Will Possess Your Heart, Hakim suggested an alternate course. “Because the music is so banging,” he told Rachel, “why don’t we just rebrand it and call it something else and just go out and have some fun.” And so The Trio of Oz was born. They began recording sessions for their self-titled debut in April 2010, and they have been receiving glowing reviews for their live
shows with bassist Maeve Royce ever since. New Order’s “Bizarre Love Triangle,” the Morrissey-penned “There is a Light” and “Det Tar Tid” by the Swedish band Dungen are other examples of the trio’s teamwork.


On the bandstand or in the studio, Omar and Rachel engage in conversational call-and-response interactions from bar to bar within a song, in the tradition of all great piano trios over time from Erroll Garner to Ahmad Jamal to Bill Evans and beyond. But the repertoire is very different from the standard jazz piano trio. No other band on the scene today includes Wayne Shorter’s “E.S.P.” and “Stone Temple Pilot’s “Sour Girl” in the same set and can cover both songs with such integrity and authenticity. Just as Miles Davis covered popular tunes of the day back in the 1950s like “Surrey with the Fringe on Top” and “Someday My Prince Will Come” and John Coltrane interpreted “My Favorite Things” and “Chim-Chim-Cheree” in the 1960s, so too are Rachel and Omar putting their stamp on pop tunes of their time.

I think what gives us an edge is the fact that we do play rock music,” says Hakim. “And when we’re playing rock we’re not jazz musicians who are playing rock. We are playing rock! But at the same time, both of us are steeped in jazz. I think that’s another reason why Rachel’s concept was a good fit for me. I was able to give it a shape that comes from playing rock but growing up in the jazz tradition. I could blend things differently from a guy who really didn’t grow up playing rock on drums, let alone playing rock in front of 50,000 people. So now when I hear a Coldplay song, I’m listening to it like a rock drummer but when I hear Rachel’s arrangement, I’m framing it as a jazz drummer. So it’s an interesting blend.” Adds Rachel, “We really love this music, so when we play it, we really have a respect for it that I think is really useful.” Rachel’s classical upbringing – her mother was an opera singer and she began voice lessons herself at an early age — was interrupted by her immersion in jazz as a teenager. At age 15, she went to a summer session at the Berklee College of Music and later studied with pianists Joanne Brackeen and Richie Beirach, followed by jazz studies at the New England Conservatory. She subsequently landed gigs with Mike Mainieri’s Steps Ahead in 1990 and the Al Di Meola group in 1992 before apprenticing with master composer Wayne Shorter. Her tenure in Peter Gabriel’s band during his Growing Up tours from 2002 to 2006 flung open the door to the rock world, and she’s been at the forefront of blending alternative rock and jazz ever since in her own trio.


Omar’s roots are strictly in jazz. His father Hasan Hakim was a trombonist who played with such jazz legends as Duke Ellington, Count Basie and Louis Armstrong and often brought his young son along with him to gigs (even allowing him to sit in at the age of 10). Growing up in Jamaica, Queens with such other musically-inclined friends as bassist Marcus Miller, keyboardist Bernard Wright, trumpeter Tom Browne and drummer Lenny White and later attending the High School of Music and Art in Manhattan put Omar on a track toward a career in music. His big break came when he joined the premier fusion group Weather Report in 1982. He subsequently ventured into the pop realm by touring and recording with.


During her years of intensive woodshedding at the New England Conservatory, Rachel was a self-described jazz purist. As she recalls, “The only non-jazz groups I really liked were Steely Dan, Yes and the Police. My attitude toward pop then was, ‘It’s all commercial bullshit!’ So I didn’t really allow myself to get into rock music then.”


A turning point for her came in 1995 while working on Wayne Shorter’s Grammy Award-winning High Life album. “After that, I started getting into bands like Depeche Mode, Coldplay and U2. I was a little late on Kurt Cobain and Nirvana, Courtney Love, Alice in Chains. The Killers and New Order came much later. I basically caught myself up on that whole English rock scene and the alt-rock scene, and I found myself kind of attracted to goth rock. So I had the concept to kind of be a goth jazz band. And that’s why I tend to pick songs that are more hard-edged.”


On Coldplay’s “Lost” she uses Shorter’s style of non-functional harmony. On Death Cab for Cutie’s “I Will Possess Your Heart,” she incorporates a bit of Freddie Hubbard’s “Red Clay” while on the Morrisey song “There’s a Light,” she uses “Giant Steps” kind of changes. Says Rachel, “It’s really important to me to have to blow changes on these tunes that are as challenging as Wayne Shorter’s ‘E.S.P.’, which is another reason why we keep that song in our live sets. It’s a kind tune that really keeps you on your toes, and it also inspires people who don’t know anything about jazz to go find out more about Wayne Shorter.”


She is also quick to point out that the lyrical content of some of this alternative rock piece was particularly inspiring to her. “Tunes like ‘Angry Chair’ and The Killers’ ‘When You Were Young’ are really important to me. ‘Angry Chair’ is a really dark song but the bridge is all about there’s light, there’s hope. And shortly after he wrote that tune, the singer committed suicide. And ‘When You Were Young’ is a really heavy song about dreams and love and being disillusioned. The Stone Temple Pilots song ‘Sour Girl’ has really important lyrics to me. And ‘Bizarre Love Triangle’ has really intense lyrics that Omar and I really like. ‘There Is A Light’ is a dark, twisted lyric about if a double-decker bus crashes into us, to die by your side is a wonderful way to die. And the lyrical content of these songs really plays into the arrangement for both of us. Because Omar will play a beat that goes with the feeling. And we both have such a conversational thing going on through all of these songs.” Adds Omar, “Oh, it’s incredible, man! It’s this weird, magical thing that happens when we play together. It’s almost like it taps you on the shoulder in a way, ‘Here it is, here’s the magic.’


While Rachel and Omar are touring this summer in The Trio of Oz, they will also be backing Italian legend Pino Daniele on some select concerts in Europe.


PRESS QUOTES
The Guardian/John Fordham: “Witty, original, focused, and a formidable exponent of a post-Herbie Hancock/ McCoy Tyner style meets the Bad Plus, Z makes a charismatic role model…the pairing of Z and Hakim turns up the intensity and the piano virtuosity more
” Financial Times/Mike Hobart “….Rachel Z, whose new piano trio dovetails the detailed choreography of jazz into the flimsier structures of pop and rock. It featured the pyrotechnic flare of drummer Omar Hakim – introduced, not inconceivably, as “the best drummer in the world” – and any a musician would need to be on their mettle simply to keep Rachel Z not only complemented Hakim’s rhythmic tiger, but also joined a still small group of jazz musicians whose canny arrangements and trenchant swing rejig indie “pop into unadulterated jazz.” there are few artists as gifted as Miss Z”.
LA Times/Don Heckman “…Z’s piano work, with its marvelous combination of air, flow, and rhythm…”.
Keyboard Magazine:“If you’re a jazz aficionado, this CD will give you newfound respect for rock songwriting. If you’re not, it may well turn you into one. Essential listening.”